We focus on the fundamental physics of flow and deformation in porous media. Our goal is to bridge the controlling mechanisms rooted at the microscale to the emergent behaviors observed at the macroscale. A core part of our activities is directed towards devising non-classical algorithms and experimental imaging techniques that probe microscale processes and translate useful insights into macroscale information. Our interests are driven by applications of porous media in energy and the environment. They include subsurface technologies such as CO2 storage, geothermal energy, natural gas, groundwater remediation, as well as manufactured devices such as fuel cells and batteries.

Fluid flow and mechanical deformation in porous media is governed by fundamental processes that occur at the scale of individual grains and pores that make up their microstructure. Microscale models can simulate such processes in great detail and establish a link between small-scale physics and large-scale behavior. The understanding that results from probing this link can improve current macroscopic descriptions of flow and mechanics in porous media. From an engineering viewpoint, microscale models are useful for computing material properties, optimizing flow or geometry, and quantifying uncertainty in geological applications. To accomplish any of these tasks, a significant amount of computation is required. Our goal is to design multiscale algorithms that are efficient, accurate, and scalable on parallel machines. We place special emphasis on the ability of algorithms to estimate and control their prediction errors. The end result is a reliable engineering tool applicable to a wide range of practical problems from CO2 storage, subsurface energy production, to designing fuel-cell and battery components. References: Mehmani & Tchelepi (2018), Mehmani & Tchelepi (2019), Guo, Mehmani, Tchelepi (2019)

Solute transport is relevant to several applications such as groundwater remediation and CO2 storage in the subsurface as well as drug delivery in microfluidic devices. We have developed pore network models that can simulate transport in the presence or absence of chemical reactions. Network models are a class of microscale models that are approximate in nature. Their approximation is reflected in a simplified representation of the microstructure and the physics. As a result, network computations are very fast, often by orders of magnitude compared to higher fidelity methods (e.g., CFD). However, they are not always reliable as they cannot estimate or control prediction errors. Traditional network models of solute transport can incur large errors, which tend to be highest when molecular diffusion is weak. Our networks overcome such limitations through a mathematical reformulation of the governing equations and a more accurate geometric representation of the microstructure. While the ability to estimate or control errors remains elusive (inherent to all pore networks), we have established empirical error bounds that ensure reliable application of the networks to new problems. Compared to high-fidelity CFD, our network models yield predictions within 10% error at O(103-4) times the speed, openning the door to rapid engineering and control of solute transport in porous media. References: Mehmani & Tchelepi (2017), Oostrom, Mehmani, et al. (2016), Mehmani & Balhoff (2015a), Mehmani & Balhoff (2015b), Yang, Mehmani, et al. (2015), Mehmani & Balhoff (2014)

Geologic formations are often very heterogeneous. Rock properties such as permeability or Elastic moduli can vary by orders of magnitude from one location to the next. Complicating matters further, the scale at which flow and deformation occur is in the order of a few microns, which is much smaller than the meter scale where engineering decisions are made. Our goal is to bridge this gap through multiresolution imaging. We combine meter-scale measurements such as hyperspectral imaging and optics with microscale data obtained from microscopy, experiments, or simulation in order to map the spatial variability of rock properties at ultra-high resolution. Specimens that are the frequent subjects of our study are cores. The produced maps may subsequently be upscaled and used as inputs to reservoir simulators or studied in isolation to extract useful insights about the interaction between microstructure and macroscale properties. We have demonstrated the success of such an approach for a 120ft organic rich shale from the Green River formation in Utah. 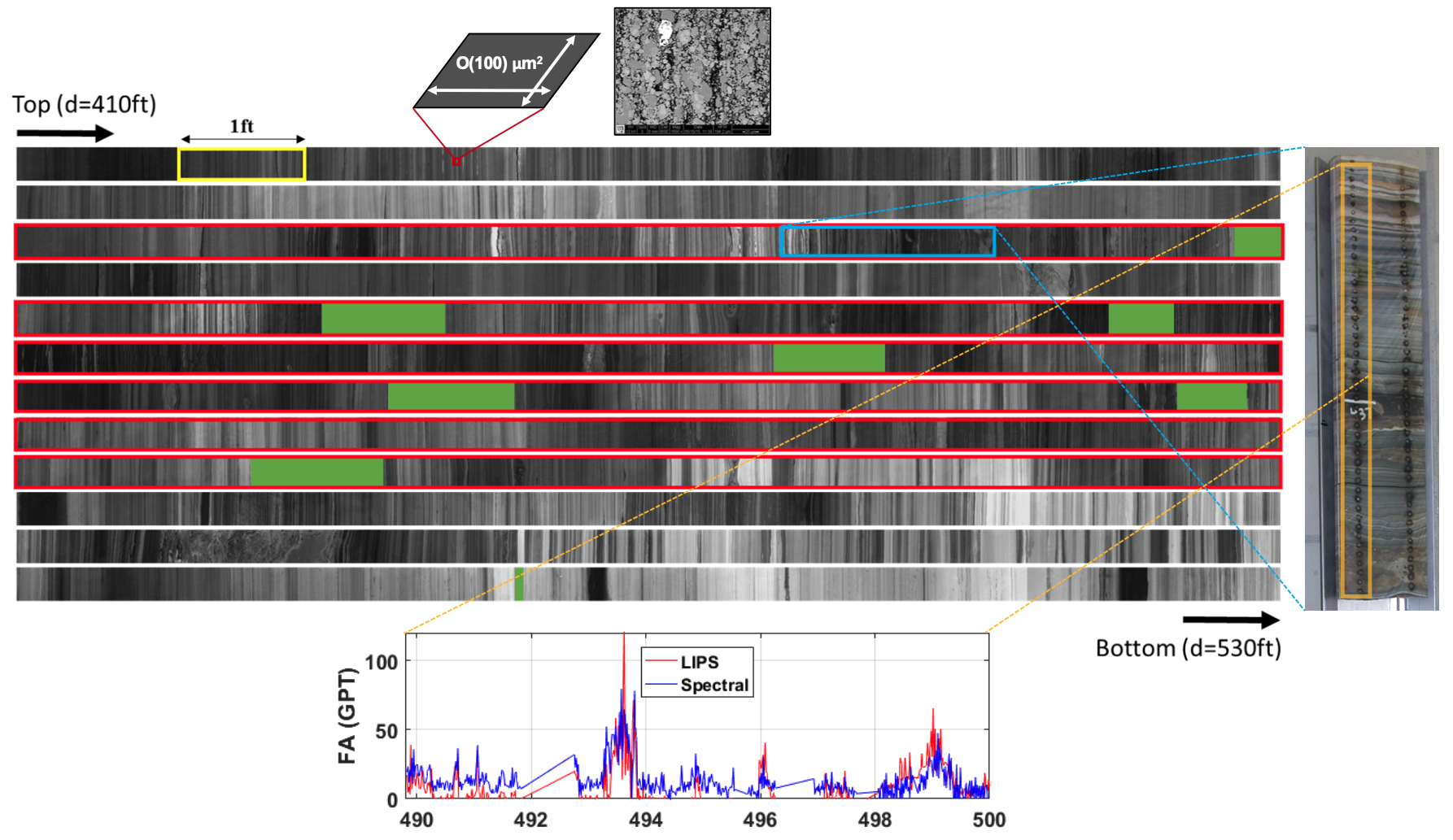 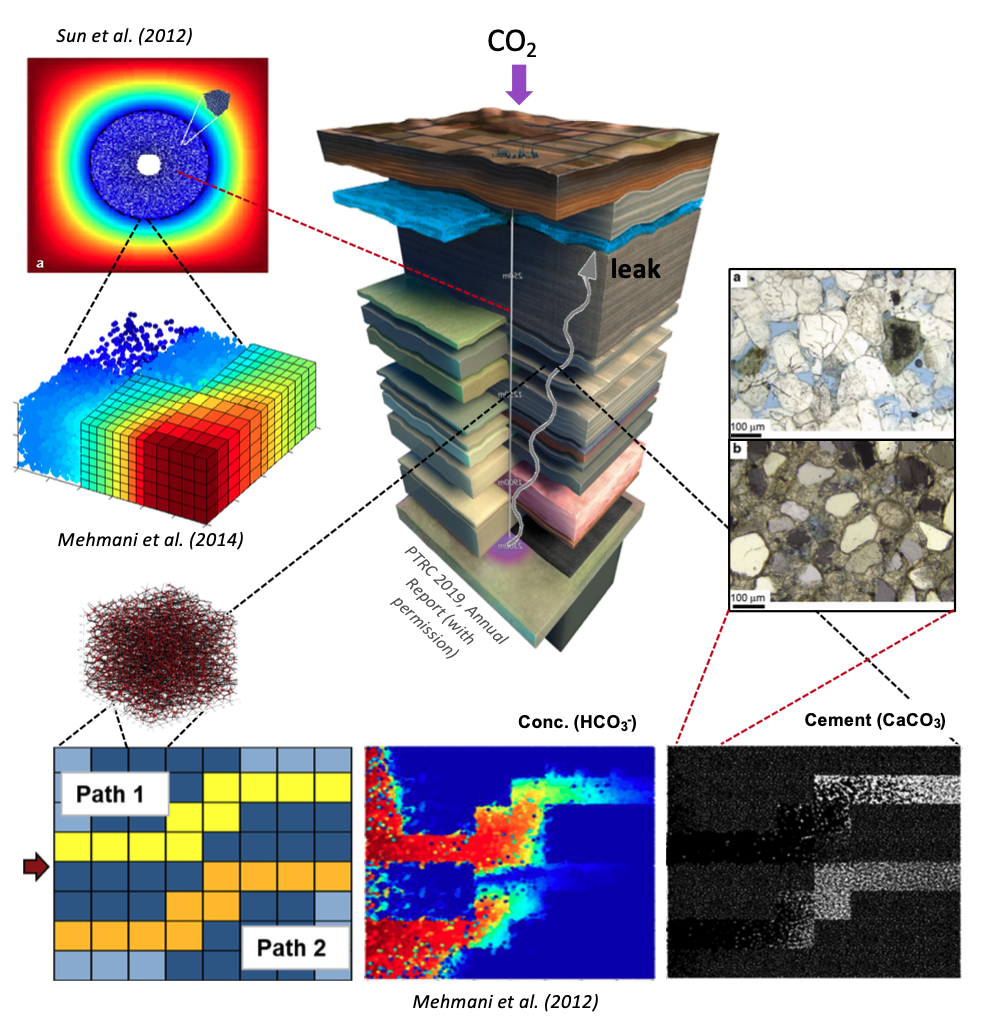 Flow and transport in porous media occur at the microscale but have macroscopic manifestations that are of practical importance in a several engineering applications. In CO2 storage, for example, geochemical reactions can lead to mineral dissolution or precipitation that alter the microstructure of a rock and ultimately enhance or reduce its permeability. Quite often, it is desirable to model such systems purely at the macroscale without ever resolving the microscale dynamics. When this is possible, one says that scales are separated. A purely macroscale description can then be constructed and used in practice. For many practical problems, including strong mineral dissolution and precipitation, scales are not separated and the dynamics of the microscale remain coupled to those of the macroscale. In this case, a purely macroscopic description does not exist and microscale computations must be, somehow, incorporated into macroscale modeling. Such models, that establish a two-way coupling between a macroscale and a microscale model are called hybrid, and various techniques have been proposed in the literature targeting different aspects of the problem. We focus on hybrid mortar domain decomposition methods, which allow parts of a domain to be represented with a macroscale model and other parts with a microscale model. The two parts are coupled by exchanging information at the interface. The framework has the advantage of coupling fundamentally different model types, with potentially different physics, and being scalable on parallel platforms. They can also be used to simply solve very large, purely microscale problems. Together with our collaborators, we have developed and applied such techniques to passive and reactive transport in CO2 sequestration and leakage, non-Newtonian flow, and near-well as well as far-field upscaling of permeability. References: Mehmani et al. (2014), Mehmani et al. (2012), Sun, Mehmani, Balhoff (2012), Sun, Mehmani, et al. (2012)